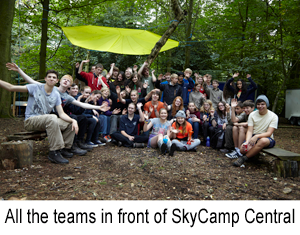 This year, saw six Explorer teams from across the county compete for the SkyCamp Challenge Trophy, named in memory of Donald Woodhouse. A number of new features to the competition were introduced this year including: a central woodland control centre – raised above the ground, of course; an improved kit zone and distribution for the start of the competition; and, a mass start obstacle course just to get the adrenaline flowing at the start of the contest. 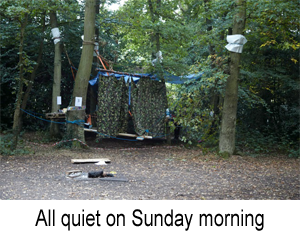 The SkyCamp Challenge is a camping competition with a difference. The teams in SkyCamp must build their campsite in the woodland at PACCAR between 50cm and 2.5m above the ground. How they do this and which equipment they choose to achieve it is entirely up to them to select and bring. Arriving on Friday evening, the teams selected widely different sites for their SkyCamp entries and staked their claims with a 24m tape and team sign to fend off the competition. With all the kit in place on Saturday morning, every team was straight in to the fray with pioneering poles, cargo nets,
platform decking and shelters. Every construction was built to a different plan and every team pulled together to get their site in to shape. Additional team challenges, distributed on the hour, every hour meant that there was no time to pause and all manner of Scouting and personal skills were tested throughout the day. 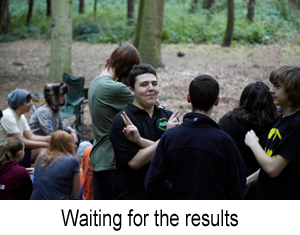 By mid-afternoon on Saturday the independent judging team were beginning to take a look at the progress so far. They were already impressed and the scoring was close across the board. By five o-clock every team and all of their kit was off the ground ready to start the evening meal – prepared to a pre-registered menu from each team and off the ground at all times. As dusk began to close in around the woodland sites, the meals all tested, tasted and cleared away it was time for everyone to relax. Everyone involved gathered at the Campfire circle to relax, listen to the music in the chill-zone and cheer at the “fire on a wire”. What else could it be but a campfire that was off the ground too.

At the end of day one, the points still close, any of the teams were in a position to win the competition. So a well-earned rest in hammocks, cargo nets or on platforms gave everyone, including the SkyCamp Team, a chance to recharge the batteries for the final challenges on Sunday. Early on Sunday morning, a slight drizzle in the air, breakfast in the Skyzone was just long enough to see the day brighten up and get everyone set up for the day. The first challenge was judging every other site in the competition. Every team had votes to cast for their choice of the site that they thought was the best. These were fed into the overall points totals. A short break to watch the investiture of four Eagle Scouts and the presentation of a Queen’s Scout Award to Jennie Green and it was on the final challenge – take everything apart again and leave your site in pristine condition. 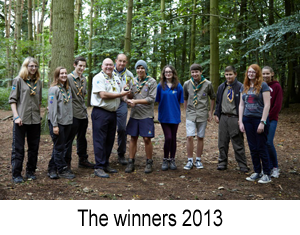 As the final points were tallied, the scores were still very tight. The County Commissioner, Terry Kingham was on hand to present the trophy as the points were read out. And the results were: In third place, Team Sexy Chocolate Llamas from Poindexter ESU; in second place, Team Troublemakers from Feltham ESU. The winners this year were Robin’s Army from Polaris/Uxbridge District ESU who now hold the trophy for a year and win a free weekend backwoods camping training from The Polaris Survival Training Co, our sponsor for the year (unrelated to the ESU despite the naming coincidence.

SkyCamp Challenge will return in 2014. The dates are already in the diary. Next year there will be a Network and a Leader level competition with trophies already in place to be awarded. Don’t miss out…. Book your place now!

Posted On 19th December 2013 ~ Comments Off on Thank you
Now it is nearly Christmas, it is time to say some thank you’s from the Operations team at Paccar Scout Camp. Thank you to all

View Our Risk Assessments Below